I received an interesting message from a cousin, Cindy Davis. She had an old photograph of her mother, older sister, her uncle, her great-grandparents, and a mystery person known as “Cousin D.” That was the name written on the back of the photo. The photo was thought to have been taken in about 1958. She gave me the task of finding out who Cousin D is. 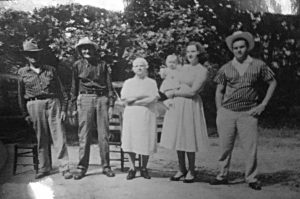 I searched through my book on the Slaughter family to try to find someone whose name started with “D” and would be about the right age and close enough kin to be called “Cousin.” I finally found a second cousin to Jacob Glover Slaughter who was named David Lee Slaughter. He was born October 12, 1880 and died April 8, 1965, which put him in the right age range and still alive in 1958. I thought he might be the one, so I started searching records online to see if I could find any kind of confirmation.

The first thing I found was an entry in the 1920 Census for Allensville Township in Person Co., NC. It showed David L. Slaughter, age 39 and single, living with his parents, Dee L. Slaughter and Barbara. The father is listed with various names in different records. In some, he is William David Slaughter, and in others, he is David S. Slaughter. His tombstone says D. S. Slaughter. Regardless, Dee was his nickname, and I thought maybe his son, David Lee Slaughter, might have inherited it.

David Lee Slaughter’s death record said he was divorced, so I started looking for his marriage. In 1920, he was still single and 39 years old. In the 1930 census, he was married but had no children. After further searching, I found that he was married October 4, 1928 in Halifax Co., VA to Annie Belle Long. The proof that I had found my answer was that his name was listed on the marriage record as Dee Slaughter, son of David Slaughter and Barbara Evans.

So the answer to the mystery is that Cousin D was David Lee “Dee” Slaughter.

I wanted to find out what happened to his wife, so I searched for her records. I found a NC death record for that showed that she had died in Durham on January 29, 1999, and that she had remarried after her divorce from Dee Slaughter. I suppose the age difference was too much, as he was 47 and she was barely 16 when they got married.

My grandfather, Charlie Bratcher Slaughter, referred to Jacob and Molly Slaughter as “Cousin Glover” and “Cousin Molly.” He probably also called David Lee Slaughter by his nickname, “Cousin Dee.” Here is a chart showing the relationships between Charlie, Glover, and Dee. Glover and Dee are second cousins to each other and third cousins to Charlie.

[right-click and view image to enlarge]

[right-click and view image to enlarge]

This was a wonderful puzzle to solve, and I’m glad that Cindy presented it to me.